THE MYSTERY AND WONDER OF THE LEGENDARY EGUSI SOUP 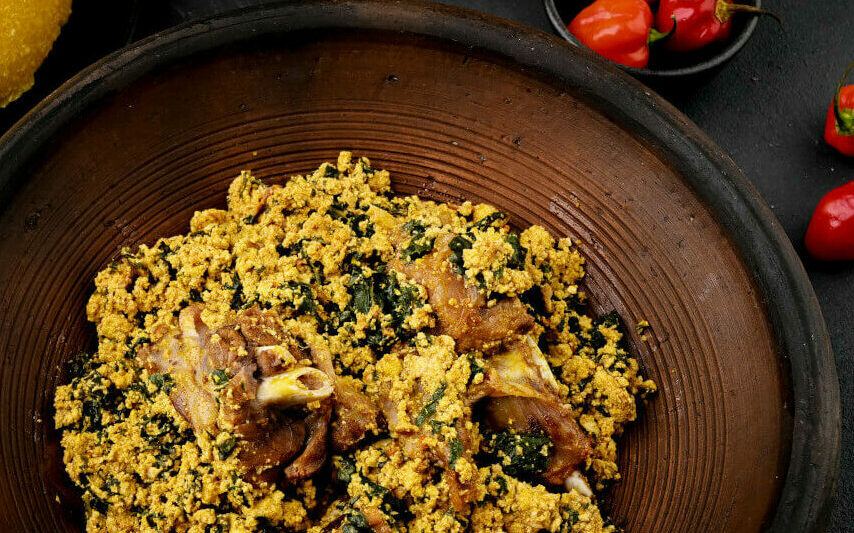 A staple across West Africa. A particular favourite in Nigerian homes and bukas (local Nigerian restaurant). Egusi soup is arguably the most popular broth in Nigeria. Prepared and enjoyed by most tribes in the country and beyond.

No one can say for sure whether it was the Igbos or Yorubas tribes of Nigeria that created the dish. To this day it is still a hotly debated topic. All we do know for sure is its region of origin and how it is extracted. It is known as “Miyan Gushi’ in Hausa, “Ofe Egusi” in Igbo and “Efo Elegusi” in Yoruba.

The soup takes its name from egusi or agushi. The seeds thicken and flavour the soup. They are extracted from the cucurbitaceous plant, and then sun-dried until their shells’ colour shifts to a warm mustard yellow. After being dried, they are stored and later deshelled and ground which is then used as a major ingredient in west African cuisine.
The seeds can be toasted and enjoyed as a snack, ground and pressed to extract oil which can be used for cooking, pounded into flour for baking or adding viscosity to soups and stews or blended to make a nut-based butter.

Egusi soup can be enriched with assorted meat which includes beef, smoked poultry, goat, cow skin, and offal. Seafood such as smoked dried fish, shrimp, crayfish, catfish, or stockfish. Alongside vegetables such as tomatoes and okra or leaf vegetables such as a bitter leaf, celosia, and spinach. Spices and seasoning that go alongside the dish include chilli peppers, onions, and iru.

Egusi soup is often enjoyed with eba (pounded yam), fufu, wheat meal or plain rice and is often eaten with the hand. Similar to how Kenya’s would enjoy a plate full of Ugali and roast beef. It is believed eating with your hands makes the experience more enjoyable than using cutlery.

Here at Mama Ashanti, our finely ground Egusi is served without any meat or if you prefer dished out with an exceptional animal-based protein. Either goat, beef or fish. Fried in palm nut oil with assorted pepper and spices for a delectable kick accompanied by tomatoes & onions. Added spinach finalizes this melange. We serve it with a wide range of swallows, and we recommend it with pounded yam or rice.

Product has been added
Cart ( items)

No products in the cart.